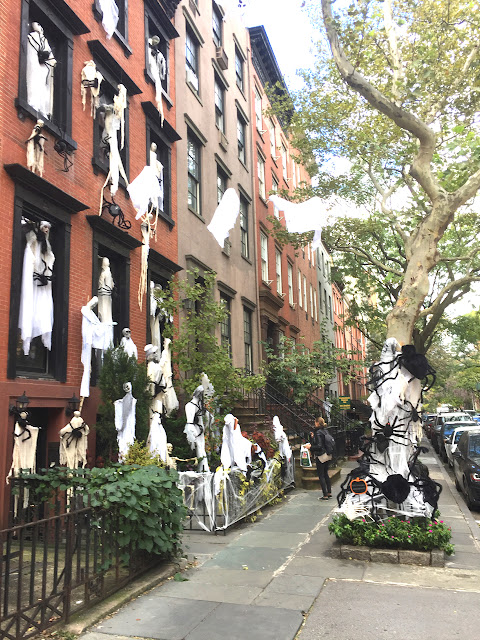 CHELSEA, NYC, October 26, 2018–Halloween decorations are already out in force, with less than a week until the end of the month.

Look at that house on West 22nd Street, with more huge spiders crawling around than you will find anywhere else in New York City other than Trump Tower. 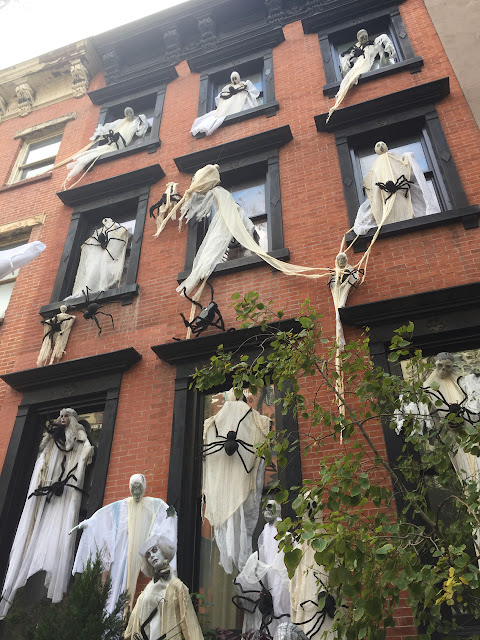 This year New Yorkers have a lot to be scared about, with midterm elections coming up in ten days.

If the Dems don't win at least the House majority, the man in the White House will continue to tweet and rally on, unchecked. 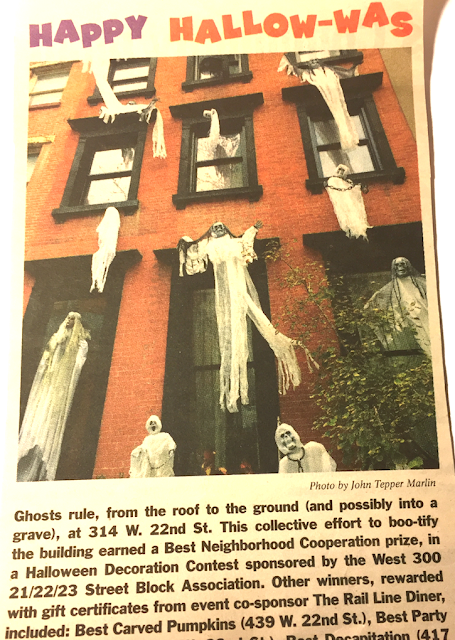 This year it pays to scare your fellow citizens into voting on November 6.

Meanwhile, the house at 314 West 22nd Street continues to set the pace in Halloween decoration.

My photo of it a few years ago in Chelsea Now appeared along with my award on behalf of the local block association as showing the Best Neighborhood Cooperation, because the display takes several families working together to give its effects.

Send your nominations for a 2018 award and I will post them here. Send to me at teppermarlin[at]aol.com.

Posted by John Tepper Marlin at 1:59 PM No comments:

Friday evening, September 28, after lunch at the Castle Hill Inn and a tour of the International Tennis Hall of Fame in Newport, the Portsmouth Class of 1958 had dinner at the Harbour Court of the NY Yacht Club, also in Newport. We ate in the mansion's original dining room.

Classmate John Hayes surprised us by bringing us a gift of five bottles of two outstanding vintages from Montrachet vineyards in France that he owns with a partner.

Montrachet is an Appellation d'origine contrôlée and Grand Cru vineyard for white wine made of Chardonnay grapes in the Côte de Beaune sub-region of Burgundy. It straddles the border between the two communes of Chassagne-Montrachet and Puligny-Montrachet and produces what many consider the world's greatest dry white wine. Four other Grand Cru vineyards with Montrachet in their names are humbler neighbors.
The Montrachet vineyards are almost equally divided between Puligny-Montrachet and Chassagne-Montrachet. Both appellations append the name of their most famous vineyard (in this case a shared one) to the name of their main village.

The Côte de Beaune is the southern half of the Côte d'Or, the most important of the wine-producing subregions of Burgundy. 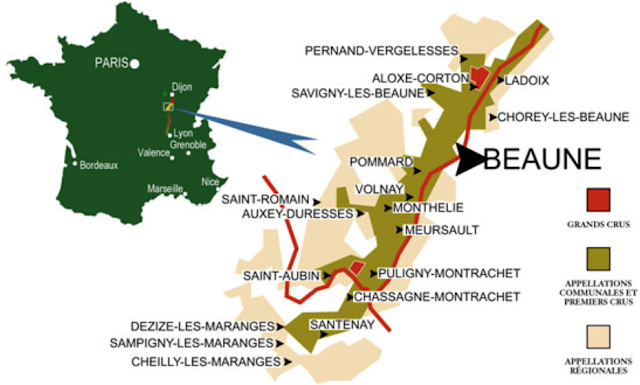 John Hayes explained that the first wine was light, a consumer favorite–2009 Puligny-Montrachet, La Truffière, 1er cru by Bruno Colin. Here's a collection of tasting reviews, all in the 90s out of 100.


The second was the local vintners' favorite–2008 Chassagne Montrachet, Clos St. Jean, 1er cru by Alex Gambal. Look it up online–you can't buy it on the sites I found, because it is sold out.

Having read what I wrote above, John sent me a followup note with more specifics about the Montrachet wines:


Montrachet is the famous vineyard that lies in both the towns of Chassagne Montrachet and Puligny Montrachet. The towns were formally Chassagne and Puligny and they affixed “Montrachet” to each for prestige purposes.

Both areas are the finest for white Burgundy wine. Five of the six Grand Cru white burgundy wines are from these two towns. Puligny is no way a lightweight. Truffière is rare, as the vineyard has less than 1 hectare of vineyards [that's 100m x100m=10,000 square meters, or 2.5 acres]. It’s a very special wine. Bruno Colin is from a family of winemakers many generations in the area.

The wine merchants sometimes say Puligny is for consumers and Chassagne for wine locals but you could argue that all day as they are both the best, just of a different style. I wasn’t referring to those two wines but to the areas.
Alex Gambal and I are partners in the winery in Beaune since 2003. He has come a long way and the wines are now even in Paris restaurants where Jeannie and I are about to go out to dinner.

The next day, Saturday, we were invited to attend classes at Portsmouth. I sat in on a course on American history and was there for the exciting bit when two lanterns were lit in Boston's Old North Church.

That was the signal for Paul Revere and a second rider to set off for Lexington and Concord to alert their militias that the redcoats were coming. The story was well told by the teacher, most of the students were engaged, and I was glad that the history of our country continues to be passed on to a new generation.

Alice visited two classes and found the teaching of a course on religious history (St. Augustine and the Manichaean heresy) to be exceptionally well explained to students who were moderately engaged, while students in a class on Moby Dick were highly engaged even though (or because?) the teacher was less intensely concerned that the students "get" everything. Two classes, two styles.

We then had a clambake lunch with fine lobsters and other New England specialties. Six of us were snapped after lunch in the photo below.
Looking back at the 50th Reunion, here are some photos I took of that event (sorry, I didn't put in Guerrero's first name because I wasn't sure whether to use a W or a V; see note following): 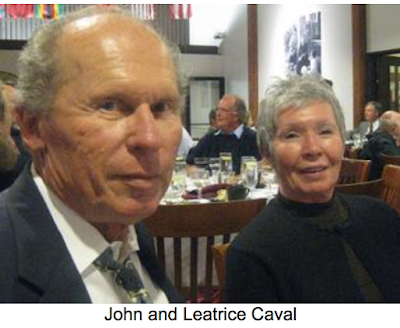 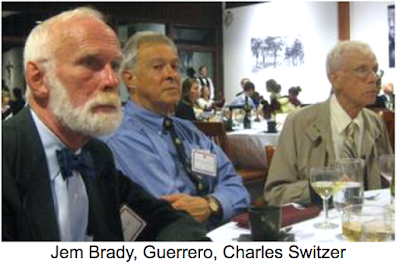 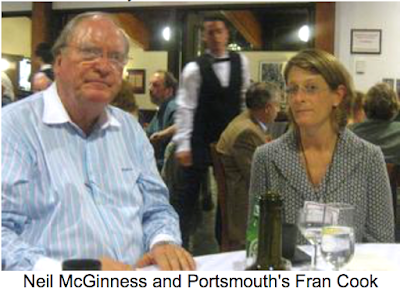 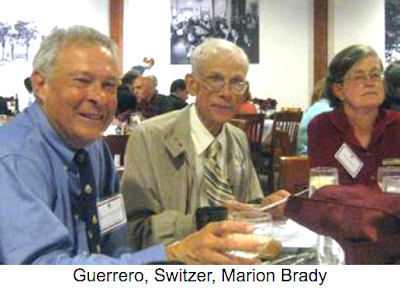 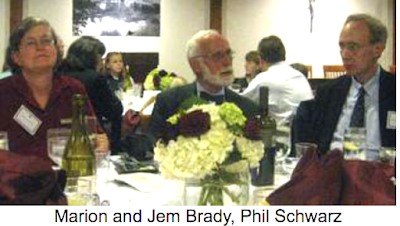 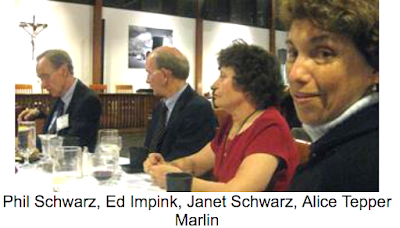 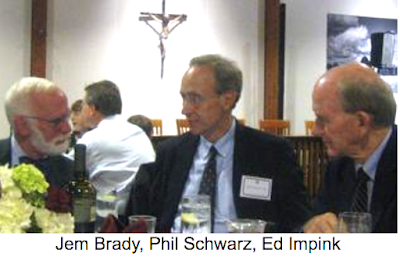 Vladimir Guerrero sent a note to me explaining why he was unable to attend the 60th reunion. He said:

Attached is a picture taken last week of my wife Deirdre and I showing off our culinary skills at a reunion of French and Norwegian friends on the coast. Please give my regards to those present, especially Ramón Ferreyros (the formidable fullback of the undefeated soccer team) and John Hayes (one of the pirates who took the “Ondine” to Providence the night before graduation). I hope you all have a great weekend. – Vladimir (Wlachy)

Here is the photo, much the worse for having been emailed and Screen Shotted:

Posted by John Tepper Marlin at 10:44 PM No comments:

EAST HAMPTON, October 6, 2018–It's worth pausing during the Hamptons International Film Festival (HIFF), taking place October 5-8 this year, to remember the first movie.

It was 130 years ago today that Thomas Edison showed the first movie, on October 6, 1889.  It was called Monkeyshines No. 1.

It was the first moving picture, although a British photographer eleven years earlier had shown that pictures of a horse viewed in sequence gave the appearance of motion.

For a short film on the beginnings of modern movies, go here: https://bit.ly/2OcEZ7a

Edison's other inventions included the phonograph, the electric light bulb and the electric power industry.
Posted by John Tepper Marlin at 6:32 AM No comments: