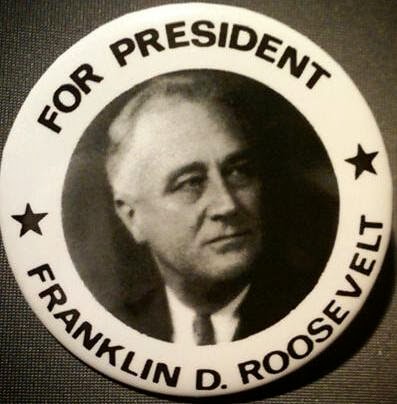 Franklin Delano Roosevelt, 32nd president of the United States, was born this day in Hyde Park, NY in 1882.  His mother, Sara, was in labor with him for more than 24 hours. The doctor gave Mrs. Roosevelt some chloroform to calm her, and 45 minutes later, young Franklin made his entrance, blue and motionless, weighing nearly 10 pounds. The doctor blew into the baby's lungs and revived him. The Roosevelts decided not to go through this again - Franklin would be their only child.

The family was comfortably well off, having made money in real estate and trade. Franklin grew up surrounded with family love and attention, but isolated by being schooled by private tutors. At 14 he was sent off to the Groton School in Massachusetts. Neither an athlete nor a rebel, FDR wasn't especially popular, but he made an effort to be appreciated by his teachers, who exhorted the children of wealthier parents to help the less fortunate.

At Harvard, FDR pursued an active social life rather than scholarship. He loved to meet new people and was eager to lead. After marrying his cousin Eleanor and graduating from law school, he entered politics in 1910 at the request of some fellow New York Democrats. He was enthusiastic and optimistic, which served him well later when he faced his own illness and then as President the challenges of the Depression and World War II.

He was diagnosed with polio in 1921. Eleanor Roosevelt said:


He had real fear when he was first taken ill, but he learned to surmount it. After that I never heard him say he was afraid of anything.

He never gave up hope of recovery, and concealed the extent of his paralysis from the public, with the cooperation of the media.

FDR liked watching cartoons (he loved Mickey Mouse), collecting stamps, playing cards and bird-watching. For his health he built a pool he swam in at the White House. He held a nightly cocktail hour for his close associates. Besides the formal state dinners, Franklin and Eleanor hosted teas, children's parties, dances, cocktail parties, and game nights. Sometimes, Roosevelt would lead a sing-along, and his birthday parties had friends and family performing comedy skits. Guest lists were often twice what had been planned for. Last-minute invitations to guests to stay overnight were extended when all the White House rooms were already full. The Roosevelts had 28,000 visitors in one year, 1936.

FDR's Scottish terrier, Fala ("Murray, the Outlaw of Falahill") accompanied the President on his travels and slept at night in his own chair at the foot of FDR's bed. He was given a bone every morning, and FDR fed him at night. He needed his own secretary to handle all the mail he received from American fans.When FDR died of a cerebral hemorrhage in 1945, the dog was inconsolable. Eleanor said that Fala spent the rest of his life waiting for his master to return. (The above is abbreviated from a biographical sketch by Garrison Keillor.)

My father, Ervin Ross ("Spike") Marlin, won a place in FDR's administration through a competitive examination taken by thousands of people in 1932. He told me later - "I never felt so rich as when I had a government job in the Depression." In our house, growing up, FDR and Winston Churchill were godlike.

I have learned a lot about FDR through my research for a biography of FDR's first Treasury Secretary, William H. Woodin, whose contribution to calming the financial panic (and the cost of this effort to his health) has been under-appreciated. Woodin focused on addressing the liquidity issues by printing huge amounts of currency for the banks, while refusing to reopen the insolvent banks after the Bank Holiday. He supported the Glass-Steagall Act that put a ring around the banks in return for their deposits being insured. It was 75 years before this fine financial system collapsed, but it was undermined steadily for year before that. The Steagall portion of the Act, i.e., deposit insurance, has survived, but that was supposed to have been a favor for the banks in return for the Glass part of the bill.

Woodin worked with FDR on supporting his Warm Springs foundation to provide care for indigent people with polio. FDR's democratic instincts were revealed by his wish to have his face be on the lowly dime rather than on paper money.
Posted by John Tepper Marlin at 11:55 PM No comments:

The post has been superseded by this one:
http://nyctimetraveler.blogspot.com/2015/03/descendants-of-william-h-woodin.html


This post is left up to preserve links to it.


Note: This is a work in progress, a draft chapter in a biography of Will Woodin. Big thank-yous to Charlie Miner, Woody Rowe, Suzanne Phipps Hyatt, Mary Mae (Mimi) Rude Bell and other descendants of Will Woodin for help. - John

Posted by John Tepper Marlin at 12:15 AM No comments: