William H[artman] ("Will") Woodin, FDR's first Treasury Secretary, was born in Berwick, Pa., but before his family settled in Pennsylvania they lived in Oxford, Conn.

His ancestor David Woodin left England because he did not conform to the Church of England. Being a dissenter was, for a time, a treasonous way of life.

The English dissenters with which the first Woodins identified appear to have been Congregationalists. Having first  tried settling in the Netherlands, the dissenters migrated in large numbers to New Haven.

Why New Haven Was a Magnet for Puritans

New Haven was founded in 1638 by John Davenport and some 500 other Puritans who left Boston to create a theocratic colony. Unfortunately there were lapses of discipline in Boston and immigrants to New England chose to go to a new colony that permitted only fellow dissenters. Called the New Haven Colony, it was originally independent of the Connecticut colony to the south.

The Congregational churches or meetinghouses in the United States broke more definitively with the Church of England than the Presbyterians, who were at times allied with the Anglicans. The distinctive feature of the Congregational Church is that each church runs its own affairs; there is no hierarchy. The Presbyterians, however, elect not only their elders but higher regional levels of church leaders—the American Constitution is modeled on the Presbyterian church organization, using some of the language of Free Masonry.

The Congregational churches led the migration to America and later the revolt by Oliver Cromwell and others against Charles I. In 1630, Puritans founded the first American Congregational Church in Watertown, Massachusetts, under the leadership of Sir Richard Saltonstall. They chose Rev. George Phillips from Norfolk County, England, as their first pastor.

Because of their emphasis on thinking for themselves, the Congregational churches put great emphasis on learning and founded some of the first colleges and universities in America, starting with Harvard in 1636 and then (as with Cambridge leaving Oxford) through dissent with Harvard thinking, Yale. Then they started Dartmouth, Williams, Bowdoin, Middlebury, and Amherst—and later, Beloit, Carleton, Grinnell, Oberlin, and Pomona.
As Harvard was forming, in 1635, seven of the Watertown Puritans who came in 1630 left the Boston area and settled in Wethersfield, Connecticut, becoming the second church organized and located in Connecticut (the first being in Windsor, earlier in the same year). In 1641, the New Haven Colony, at Rev. John Davenport's suggestion, offered land to 28 Wethersfield families within New Haven and they became the First Congregational Church of Stamford, six years before Stamford itself formally existed. Rev. John Sherman served as first pastor in Wethersfield (1635-1641) and Rev. Richard Denton, originally from Halifax, England, served as first pastor of the church in Stamford (1641-1644). Out of the migration to New Haven would come the momentum to found Yale.

William Woodin Migrates from England before 1642

Records of the First Congregational Church in New Haven indicate that three Woodin generations lived in New Haven at least part of their lives. The first William Woodin arrived three years after New Haven was founded, in 1842. He married Sarah Clark, who may have been the reason he chose New Haven, because she seems to have had family in the Colony. She died in 1691, seven years after her husband. Almost surely he or she had family or business connections in New Haven. They were members of the growing Congregational church, which would found Yale University in 1701, ten years after Sarah died.

The first two American generations of Woodins appear to have sought security and lived long lives. The two Woodins born in New Haven to William and Sarah Woodin lived to an average age of 70. Will Woodin's g4[gggg] grandfather, Benjamin Woodin (1670-1738), was born when his father was 29. Benjamin married Mary Wilmot and he lived to be 67. His wife was five years younger and lived four years longer.

Benjamin and Mary Woodin had a son William in 1718. He married Katherine Harrington and moved to Oxford, Conn., He lived to 73 and his wife to 80.

Oxford, Conn. is located midway between Waterbury and Bridgeport, nestled between the Naugatuck River to the east and the Housatonic River to the west. The two rivers create an opportunity for good farmland and woodlands. Oxford, Conn. has a sawmill that would have been an Oxford export and generated the raw materials for builders of homes and boats in the region. Today there are many Woodins living in Oxford, with first names Alvin (connected with the Trowbridge family), Donald, Heidi, Lisa, and Pin Dylan.

The two Oxford-born Woodin ancestors were adventurous. Both had shockingly short lives. One Woodin died at sea as a young man and his son died of an illness in the same year his wife died.

Milo Woodin was born in 1774 in Oxford but decided to make his career on the open seas as a whaler — a dangerous but exciting profession. He was successful, rising to become captain of his own whaling ship, an Ahab (but presumably nicer) of his day. He married someone named Lucy (her last name is not recorded anywhere). Sadly, he was lost at sea as a young man of 28, in 1803.

Five years before he died, in 1798, Milo had a son, Will Woodin's great-grandfather, David Charles Woodin. David was an architect, and the last of the Woodins born in 1798 in Connecticut.

David Woodin most likely left Oxford, Conn. in search of work. Pennsylvania was well-suited for the industrial revolution that was under way in the early 19th century, with ample coal and iron and rivers to carry them on. He was married in 1819 to Sarah Hartman (1792-1825), who was born in Catawissa, Columbia County, Pa., six years before her husband. David died, like his father, a very young man, on October 21, 1825, just 27, a month after his wife. Sarah’s brother Casper Hartman and his son and daughter-in-law were felled by an illness called the “flux”. The same illness seems to have killed David Woodin and his wife. It is considered today to have been a form of dysentery caused by bacteria or a parasite.


David and Sarah's children were William Hartman Woodin — Will Woodin's grandfather and co-founder of the Jackson & Woodin foundry — and two younger siblings, Joseph B. Woodin, and a daughter whose name is lost. All three of them were orphaned in 1825, the eldest being just five years old and the daughter aged two. These toddlers appear to have been brought up by Sarah’s brother Casper Hartman, and his wife Deborah Carr. Casper was born in Catawissa in 1777, the son of a pioneer German immigrant, Johann Wilhelm Hartman (1748-1831) from Baden Baden, Germany and a Quaker, Frances Reemy, so that there may have been some Quaker influences in the home of David Woodin.
Posted by John Tepper Marlin at 7:16 PM No comments:

Tom Mboya was a fervent apostle for Kenya's freedom, following Jomo Kenyatta. However, Mboya sought to achieve independence without violence, and did not join in the Mau Mau uprisings against the British. Mboya led Kenya's second-largest tribe, the Luo, which included many Catholics and Anglicans and some Muslims like Barack Obama's father.

When Pamela Odede was engaged to be married to Tom Mboya, she attended classes at the Kianda cooking school. A graduate of Western College for Women in Oxford, Ohio (now part of Miami University in Oxford) — also attended by Donna Shalala who now heads the Clinton Foundation — she decided to convert from the Anglican faith to her husband's Catholic faith. She came to several classes in Catholic doctrine with Olga Marlin.

Olga and Pamela became friends and the Mboya children called her "Auntie Olga".

In her memoir, To Africa with a Dream, Olga writes about getting to know Tom Mboya. He told her several stories of how he was treated during pre-independence days (pp. 124-125, 2nd edition).

Prior to independence, Mboya worked on major documents for a future independent Kenya, including its constitution.

He also pleaded eloquently for a Marshall Plan for Africa and was appointed Minister of Economic Planning and Development in the first coalition government led by Mzee Kenyatta.

On July 5, 1969, a quiet Saturday afternoon, Mboya, was shopping downtown. He stepped into Chhani's Pharmacy to buy a bottle of lotion. When he came out, an assassin opened fire, escaping in the ensuing confusion.

Mboya was struck in the chest. Blood soaked his suede jacket. He died in an ambulance on the way to Nairobi Hospital.

Grieving Kenyans soon gathered in such numbers at the hospital that police with batons were called out to keep the crowd under control with batons.

Only 38, the handsome, articulate Tom Mboya embodied many of the qualities so urgently needed by the fledgling nations of black Africa. He saw beyond his tribe to Kenya's detribalizing urban classes. He made them his constituency. His loss was a big blow to Kenya.
Posted by John Tepper Marlin at 7:48 PM No comments:

Portsmouth Priory (as it then was called) had a community of 24 Benedictine monks when I was there in 1955-58. All but two of the monks are in the photo above. The year before, Fr Aelred ("Barney") Wall, Headmaster, was in the photo; he switched to a more contemplative monastery in my senior year. The strength of the monastery may have peaked a few years later when Luke, Paul, Anselm and Gregory became novices. 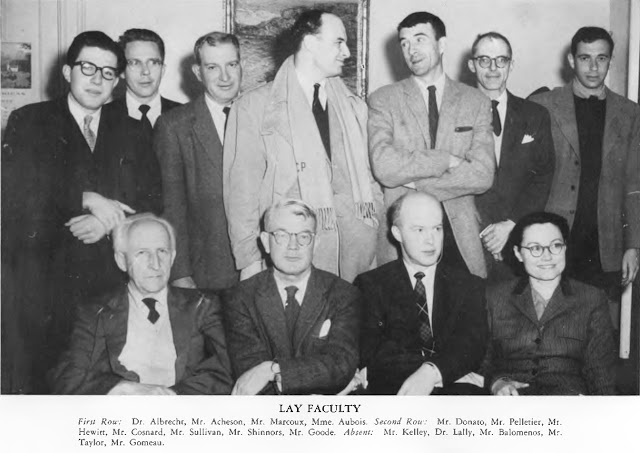 As vocations to monastic life have fallen off, and older monks have gone to their eternal reward, the ratio of monks to lay staff has reversed. The lay faculty today outnumbers the monks. On the Abbey web site five monks are shown as actively involved in the school, while the Portsmouth directory shows 116 on staff.

Similar trends are observable in other monastic institutions. Ampleforth Abbey and College in England is one of the houses of the English Benedictine Congregation (along with Downside) that founded Portsmouth. Ampleforth is one of the largest religious college-preparatory schools in the country. The number of monks has fallen at Ampleforth, from more than 100 when I was there in 1952-55 to about 30 today.

At Ampleforth today, according to its Headmaster Fr Wulstan, who was in New York City this past week, monks are placed in roles where they can have a maximum influence on the spiritual life of the boys and girls at the school. Almost all of the teaching is now assigned to people who recruited for their teaching skills and academic background.
Posted by John Tepper Marlin at 10:41 PM No comments: