College grades have apparently inflated since my college days.

An A is now the most common college grade, according to an article published last year by Professors Stuart Rojstaczer and Christopher Healy:


In 2012, an A was the most common grade given nationally (43 percent). A's and B's together now account for 73 percent of all college grades at public universities and 86 percent of all private school grades.

Arthur Levine, president of the Woodrow Wilson National Fellowship Foundation and former president of Columbia's Teachers College, similarly found:
Even at Harvard? The Harvard Crimson earlier this month says yes. In "Substantiating Fears of Grade Inflation, Dean Says Median Grade at Harvard College Is A-," it reports that at Harvard, the "most common grade is A." The story has 504 comments as of today.

Rojstaczer and Healy say that student engagement has fallen and the average amount of study has declined from 24 hours a week in the '60s to 15 hours a week today.

Some universities including Columbia and Dartmouth, have begun issuing "honest transcripts", disclosing not only the letter grade the student received for each class, but also the average grade that the professor gave the entire class, thereby putting each grade in context. Thomas Lindsay reports this month (mindingthecampus.com) that a bill in Texas would require honest transcripts for students at Texas universities. .

The "honest transcript" program has been championed by Republicans, presumably because they don't like liberal elites, even though the careers of both Bushes were assisted by these elites. Also, teachers are highly unionized and focusing on grade inflation can be seen as a way for those who criticize labor unions to demonstrate a collective laziness among students and faculty.

However, I don't know why this should be a partisan issue. As it stands, recent graduates from colleges with inflated grades can virtually all present themselves as above average among their college peers. However, honest transcripts are not a panacea:


1. Some classes are selective. The professor interviews you and decides who can take the course. In this situation, the presumption is that all the students deserve higher grades than in a less selective introductory class.

2. Some universities are more selective than others. A Harvard student is presumed to be better prepared than a second- or third-tier college. Should Harvard students be graded the same way as an unselective college?

3. Some departments are more likely to grade on a curve than others. Science and engineering, where knowledge is more easily measured, tend to grade more strictly.

4. In professional schools – business, law, medicine – grade inflation is less of a problem because professors know that the grades are directly related to a person's career and the task of sorting out the best students is taken very seriously. Being too generous to students could mean certifying people as capable of something that they are not. leading  to poor clinical performance.

What other considerations should be on the table?
Posted by John Tepper Marlin at 2:11 PM No comments: 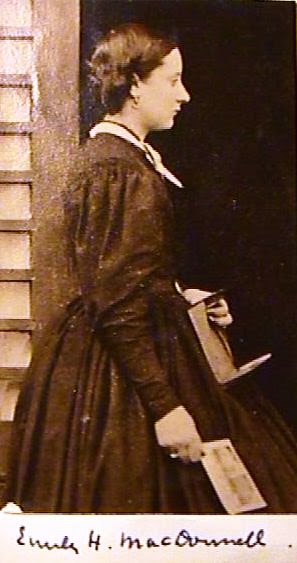 Emily was an Irish woman who married a Dutchman and lived her life in Holland. Her letters provide a unique cross-cultural window on Britain, Ireland, the Netherlands and Indonesia, with a few interesting sidelights on the United States.  The letters especially show how much of Ireland she brought with her to Holland.

Like Trojan Aeneas settling in the area that became Rome, Emily brought with her the household gods of Protestant Dublin. She was proud of her Irishness and spoke English to her 11 children during her long years as the wife of Dutch newspaper editor Charles Boissevain, although she learned enough to write a few letters in Dutch.  After the death of Charles she lived alone with the family governess, Polly, meeting separately with visitors based on Emily’s higher status.  Yet she bonded like a Viking conqueror with the country in which she settled.  Emily never traveled alone, and only visited where she had relatives.

Emily’s parents were Judge Hercules Henry Graves MacDonnell and Emily Ann Moylan; we have letters from Judge Hercules MacDonnell to his granddaughter Olga.  Emily’s family on her father’s side can be traced back to Somerled, the first Lord of the Isles in the 12th century (see genealogy).  Her grandfather Rev. Richard MacDonnell was Provost of Trinity College, Dublin, and was a solid Provost during an uneventful period, according to the history of the college.
Judge Hercules MacDonnell had an even better-known brother, Sir Richard, who became  Britain’s Governor-General (or equivalent) of five British colonies -- Gambia, St. Vincent and Lucia, Nova Scotia, South Australia and Hong Kong.  Following that he was knighted and retired to the south of France.  His wife was called Blanche.  Any map of South Australia will show the MacDonnell range of mountains at the northern extremity, near Alice Springs, named after Sir Richard.  Some ports and rivers are also named after him and his wife Blanche. A desert plant is also named after him. In Hong Kong, Sir Richard was oine of the first to build a house high above the city.[1]

The MacDonnell family can be traced back to Alastair Carrach, grandson of the 1st Lord of the Isles in Scotland, who founded the Keppoch branch of the great Clan Donald.  In 1431, part of Keppoch lands were forfeited and given to the MacIntoshes, causing a feud between the MacIntoshes and the MacDonnells of Keppoch.  The MacDonnells were warriors and the 9th chief of the clan, who was exiled for most of his life, served in the Swedish army.  The 12th chief of the clan was murdered along with his brother in 1663.  Coll, the 15th chief of the clan, was noted for his fierceness and was called “Coll of the Cows;” he resisted by the power of the sword MacIntosh attempts to retake his lands.   His son Alexander, the 16th chief, died fighting for the Jacobites at the Battle of Culloden.  At some point the MacDonnells emigrated to Ireland where they became part of the Protestant (Presbyterian or Church of Ireland) ruling gentry.

The motto of the MacDonnell family was “toujours prêt” (always ready).  In Dutch, a word pronounced like “prêt” means “fun” and this meaning of the word is more descriptive of the flavor of the atmosphere in the home that Emily MacDonnell made with Charles Boissevain.  “Fun” is a good description of the goal of Olga Boissevain, their third daughter, according to her daughter [interview, 1996].  Another MacDonnell family motto was “per mare, per terra”, which has a military association because it was adopted as a motto by the U.S. Marines.

Hercules MacDonnell was a lawyer (a barrister, arguing in court) when he married Emily Ann Moylan, who was referred to in the press at the time as the niece of Lady Jodrell.  Since his religious father did not approve of the marriage to Miss Moylan (either because she was too young or was not Church of Ireland; the stories do not say), the two eloped to London via Liverpool, whence they traveled via “horseless carriage” on the just-completed railway line connecting the two cities.  They were said to be the first couple in history ever to use the horseless carriage as a vehicle for elopement.

Coincidentally, Lady Jodrell’s daughter eloped at virtually the same time, because her parents considered her too young to marry, so that the Moylan-Jodrell cousins’ elopements were covered by the press at the same time, as in the clip shown on the previous page.

Emily Héloїse MacDonnell was born in Dublin in June 1, 1844. She grew up in a Dublin suburb and Sligo Bay, the daughter of Judge Hercules Graves MacDonnell and Emily Ann Moylan.

Emily met Charles when he was a young journalist visiting Dublin to cover an international exposition.  Charles Boissevain was two years older than Emily, having been born in Amsterdam on October 28, 1842. While in Dublin, he became ill. A sponsor of the exposition, Dublin attorney Hercules MacDonnell, invited Charles to recuperate in his home.  His daughter Emily tended to Charles and they fell in love.  Charles returned to Holland with his fiancée, and Emily married Charles Boissevain in Southampton [Woolston?] on June 27, 1867. [Stamboek van der Boissevains, entry for Charles Boissevain, p. 143.]

For the rest of her life, Emily’s main contact with Ireland seems to have been from visiting her Jameson and Crichton and Phibbs relatives at Sligo Bay in the northwest of Ireland.  She died at Het Houten Huis near Drafna in Blaricum on January 26, 1931, surviving Charles by about four years and the British-born family governess Polly by about two years.

Robert Boissevain [who left his wife and six children in Holland and emigrated to America to the voiced disapproval of all but his mother] said to his sister Hilda: “ I never feared opening a letter from my mother.  Never were there reproaches in it.” [Interview, 1996.]


[1] Randal Marlin researched Sir Richard’s life in Dublin in the 1990s. An Australian desert flower is named after Sir Richard.
Posted by John Tepper Marlin at 12:31 AM No comments: