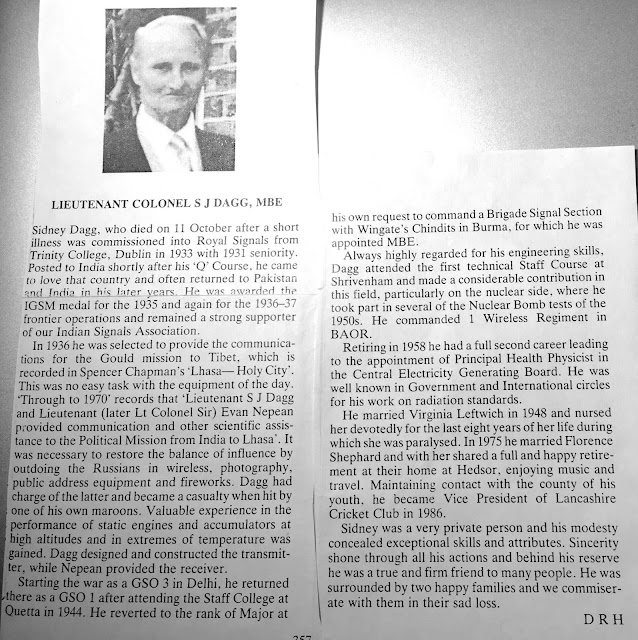 In the ten years since my mother died I have been methodically going through her many interesting papers. An interesting period is the time he was at Trinity College, Dublin, in 1930-32.

His roommate was Willem van Stockum, through whom he met my mother. As foreigners from the United States and Holland, my parents and Willem were in a glamorous circle of friends. Among their many friends who went on to fame was Orson Welles.

Yesterday I ran across the obituary of Lt. Col. S[idney] J[ohn] Dagg (1911-1988), MBE, another special person from Trinity. Dagg went from his graduation from Trinity in 1933 to a commission in Royal Signals. After his "Q" course he was posted to India. The obit is above.

I asked my siblings what they remember of Dagg. I remember him visiting, and his crisp was of speaking. My older siblings remember him better. Randal remembers Col. Dagg's being talked about frequently.

Yes, I remember the occasion of his [Col. Dagg's] death vividly. We were at a party and he said he was going to India for a banquet in his honour. I was just back from India [Brigid visited the Dalai Lama and painted his portrait–JTM], and had suffered from food poisoning there. I begged him not to go, but he said he had to, as it was in his honour. The next thing I heard was that he got food poisoning at the banquet and died!

An Ancestry.com link indicates he was born June 27, 1911, so the date of my parents' marriage would have been his 21st birthday!

He died Oct. 11, 1988, either in India (as Brigid's story suggests) or Hedsor, Bucks., where he was living in his retirement.
Posted by John Tepper Marlin at 5:04 AM No comments: