This day in 1776, after the Declaration of Independence in July, the British army under Gen. Sir William Howe landed 24,000 men on Long Island–in what is now Brooklyn. The rebellion began in April 1775 at Lexington and Concord.

The British plan was to end the war by capturing New York City and controlling the Hudson River, splitting apart the rebel colonies. This plan to take New York City succeeded, but the underlying plan to defeat the rebellion failed.

Howe misjudged the resentment of the rebels and their determination to be independent, much as a dog-owner misjudges a pet that has tasted independence and doesn't follow its master's commands any more.

Five days after landing, on August 27, Howe's troops marched against the "rebels"–from the American perspective, the Patriots–ensconced in Brooklyn Heights. They first overcame the Patriots defending Gowanus Pass and then outflanked the Continental Army. The Patriots suffered 1,000 casualties; the British lost only 400.  This was the greatest battle of the war. After this, General Washington avoided direct confrontation, playing the Scottish "secret war" that won against Edward I and Edward II, a defensive game, attacking only relatively small British contingents. Washington surely learned about this game when he was a colonel serving loyally under unpopular General Edward Braddock in the French and Indian War.

Ignoring staff advice, Howe opted not to pursue the Patriots to Brooklyn Heights, where he might have captured General Washington and his senior command, executed them as rebels and probably ended the rebellion. British General William Howe and his brother Admiral Richard Howe believed their Mission was Accomplished and that General Washington or the Congress would surrender.

On September 11, Benjamin Franklin, John Adams and other congressional representatives did reopen negotiations with the Howes. But after a couple of meetings the British refused to accept the non-negotiable demand for American independence and the congressional team went home.

The delays meanwhile gave General Washington and his troops time to retreat by boat to Manhattan under cover of darkness and fog. By the time the British army went back to work and captured New York City on September 15,  Washington and his men were on their way first north to White Plains and then across the Hudson to New Jersey. After many skirmishes in New Jersey, the Continental Army retreated to Pennsylvania.

NYC would remain in British hands until the end of the war. But on Christmas Day 1776, Washington led a bold counter-attack, recrossing the Delaware River above Trenton, and the Continental Army drove the British out of New Jersey. The war ended in Britain's defeat in 1781.
Posted by John Tepper Marlin at 10:13 PM No comments:

Jackson Pollock died at 10:15 pm 60 years ago on August 11, 1956, in East Hampton Town not far from where we spend our summers. It was on Springs Fireplace Road at a still-dangerous area, where several factors contribute to accidents:
The number of fatalities in East Hampton that weekend 60 years ago was very high, 10 people, of whom two were Pollock and one of his two female passengers. Fatalities remain high today for a small resort community (with single-lane highways for most of their length), despite serious  enforcement of DWI laws.

Pollock had some successes in the year 1953, but then relapsed into depression driven by:
Kligman, who was dubbed the "death-car girl", survived the accident. The person she invited to come with her to East Hampton, and was killed along with Pollock in the accident, was a receptionist in the New York City beauty salon that Kligman frequented. After Pollock's death Kligman began spending time with Pollock's rival Willem de Kooning, who lived on Woodbine Road.

In subsequent years there was a huge brouhaha over the provenance and authenticity of a painting called Red, Black and Silver that Kligman and others maintain was by Pollock, while others, including Krasner, aver is a fake. The story is valuable as a case history of how personal relationships and provenance affect the valuation of a piece of art. Another one in East Hampton has recently surfaced.

Posts about the ART BIZ:

Posted by John Tepper Marlin at 8:20 PM No comments:

Already appointed Chancellor of Germany, Adolf Hitler on this day in 1934 is elected President.

Now holding both offices, he no longer had any constraint. Hitler's dictatorship was in place.

Germany was a strong democracy in the 1920s, when the country was prospering, even though the terms of the Treaty of Versailles were onerous Hitler had some modest success exporting the loss of German face.

The country's democracy was destroyed step by step as Hitler appealed to a public that was demoralized by the loss of the war, the Treaty, and then the Crash of 1929:

Although now Chancellor, the appointed chief executive of Germany, he was not a dictator. He was subject to the elected President, to whom the Germany Army reported. This Having irritated Hitler and he went about eliminating constraints on his actions:
Posted by John Tepper Marlin at 12:09 PM No comments:

After a tie-breaker in one set, the two teams won one set each after more than an hour and a half of play.

Instead of a third set, the match, running on overtime, was decided by a second tie-breaker. 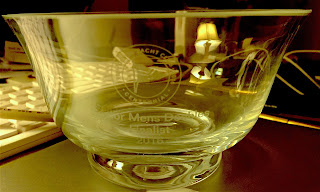 The winners were: Gouge and Browne. All four players received glass bowls as trophies.

A photo of the handsome  trophy bowl is provided at right.
Posted by John Tepper Marlin at 8:33 PM No comments:

Aug 5, 2016–By an accident of the calendar, three events occurred this day that highlight the importance of friendships in literary history.

One is the meeting of Melville and Hawthorne, who are part of the core curriculum of American high schools and therefore of American culture.

Another was the birth of Guy de Maupassant, whose stories are often assigned in school.

The Inklings group at Oxford and the Bloomsbury group in London, and the Round Table and Coffee House Club in New York City are more prominent examples of literary circles.

We sometimes forget the role of smaller or short-lived writing friendships.

Max Eastman, editor of the historic magazine The Masses, shut down by the U.S. Post Office in 1917, wrote about his own literary and personal friendships in his book Great Companions.

This fifth day of August highlights three pairs of friends who illustrate three major forms of literary friendship–parallel productivity (Melville and Hawthorne), mentoring (Flaubert and Maupassant) and exchange of letters (Snyder and Berry).


I am grateful to Garrison Keillor's Writer's Almanac blog for noting these three events today.
Posted by John Tepper Marlin at 5:04 AM No comments: