Elizabeth Foster (Libby) Woodin of New York City and East Hampton and William Wallace Rowe (Harvard '20) of Cincinnati announced their betrothal in early April 1922. Then she went on a trip to Europe on the S.S. Paris.

A beautiful photo of Libby appears in a magazine and may be viewed with a Getty Images watermark on it here: http://bit.ly/2sjZP9H.

A detail of a portrait of her obtained from the Woodin family also shows her appeal.

Libby Woodin's father Will Woodin was in 1922 president of the American Car and Foundry Co. He and his wife Annie Jessup (Nan) Woodin accompanied his daughter on the trip. The wedding took place in 1923.


Dining on the French ocean liner S.S. Paris was the height of luxury. The staterooms were supremely comfortable. The French Line brochures advertised its ships as morceaux flottantes de France, "floating pieces of France".

The S.S. Paris cuisine was so haute that legend had it that more gulls followed in its wake than that of any other ship. The French Line's success took off when a third ship joined the relay: the S.S. Île de France.


The S.S. Paris was laid down in 1913 at Saint-Nazaire, France for the Compagnie Générale Transatlantique. The builder was Chantiers de l'Atlantique of St. Nazaire. The ship's launching was delayed by the war until 1916, and it was not fully completed until 1921 because of wartime priorities and then postwar scarcities. When the Paris was finally completed, it was the largest liner under the French flag, at 34,569 tons. A short (2.5-minute) YouTube video shows the “Paris” in operation, 1921-39— https://youtu.be/u3853AWYAaU.

The end of the S.S. Paris was as spectacular as its commencement and life. The tragic burning and sinking of the ship in its LeHavre dock in April 1939 is shown in a shorter (1.5 minute) video — https://www.youtube.com/watch?v=98At2ve0BFU.

(This post will be incorporated into a soon-to-be published book about Will Woodin and his children.)
Posted by John Tepper Marlin at 10:18 PM No comments:

We have been attending the wedding of Eli Rinzler, son of Alice's Wellesley '66 classmate Cinnamon Rinzler and Curry Rinzler, to Ana Bennett. Here are three photos from the ceremony.

1. Groom Eli on Saturday is putting the wedding ring on the finger of blushing bride Ana at the Crested Hen Farms in High Falls, New York. Eli's brother Sean was Best Man. Ana's Matron of Honor was her sister.

2. At the reception, Alice is holding beaming Charlotte, who is called Charlie.

Charlie looks pretty pleased with the whole event and with Alice's attention.

3. Some of Eli's relatives and their friends gathered at the home of Curry and Cinnamon Rinzler in Woodstock, N.Y.

4. Alice with Karen Boeschenstein, who, before she retired, served for many years in the Admissions Office at
the University of Virginia. 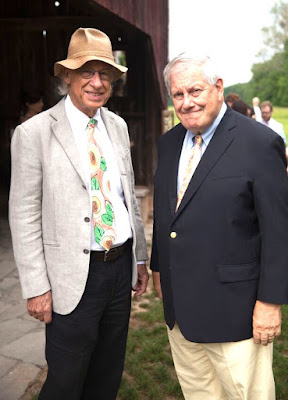 5. John with Warren Boeschenstein, a retired professor of architecture at the University of Virginia.

Posted by John Tepper Marlin at 10:42 PM No comments:

BIRTH | June 18—On his 75th, McCartney Gets New Queen's Honor

He got a nice birthday present yesterday from Queen Elizabeth II.

The Queen's actual 91st birthday is on Wednesday, but her official birthday was celebrated yesterday. So that's when she bestowed her semi-annual honors.

Sir Paul was knighted by the Queen two decades ago when he was 55 and she was 71. At 75 his knighthood is being topped up with a Companion of Honor award — the centennial of which is this month, by the way — for services to music, on the same day as J.K. Rowling won the award for her services to literature and philanthropy. Sir Paul said of the new royal distinction:


I'm very happy about this huge honor and with the news coming on my birthday weekend and Father's Day it makes it colossal!

Sir Paul was born in Liverpool, England. He is a big believer in magic in reviewing his life. When he was 14, his mother died of an embolism. This led to his establishing a personal relationship with John Lennon, whose mother had also died when he was a teenager.

McCartney and Lennon are responsible for most of the most popular songs on the Beatles repertoire. McCartney is a two-time inductee into the Rock and Roll Hall of Fame, and the recipient of 21 Grammys. His Beatles song "Yesterday" is one of the most covered songs in musical history, and he has written more than 30 No. 1 songs. Other top-ten hits of his include "Hey Jude" and "Let It BeCome".

In trying to explain how he came to write songs and become part of the Beatles, Sir Paul turns to the language of alchemy, invoking both magic and chemistry:


Every time I come to write a song, there's this magic little thing where I go, "Ooh, ooh, it's happening again." I just sit down at the piano and go, "Oh my God, I don't know this one," and suddenly there's a song. ... Life is an energy field, a bunch of molecules, And these particular molecules formed to make these four guys.

Posted by John Tepper Marlin at 3:43 AM No comments:

Her tombstone was unveiled at the Green River Cemetery on Accabonac Road in Springs.

Present were her brother and her three sons and many other relatives and friends.

Silvia died last year on June 27 at 88 at the Bryn Mawr Hospital in Bryn Mawr, Pennsylvania. She had moved in 2014 from her home in Springs to the Quadrangle, a Jewish-affiliated nonprofit independent-living facility in Haverford, Pennsylvania, where she reportedly continued to follow her team, the Mets.

At a reception following the unveiling at Ashawagh Hall, her eldest son, Jeremy, told us that the Quadrangle was founded by a couple of Haverford professors and that the Philadelphia area is heavily populated by nonprofit religion-based assisted-living facilities. It is close to where Jeremy lived, and he took charge of managing his mother's last years.

Jeremy reported that his mother was suffering from bleeding ulcers and pneumonia and asked that there be no intervention. "She was ready to go," he said. She had previously lost much of her mobility out of a reluctance to move around.


Silvia had a defiance about her during her last decade of life in Springs, symbolized by the blue streak she put in her hair.

Two of the women who came to the unveiling were retired Postal Service staff members at the Wainscott Post Office. They were grateful for the Mets tickets that Silvia subscribed to and would bring them in weeks that she couldn't use them.

Silvia was born in 1928 in Frankfurt, Germany, daughter of a mixed-religion marriage between Lotti Clara Stern and Erich Pfeiffer-Belli. Perhaps because of the rise of Nazi-inspired anti-Semitism in Frankfurt, her parents divorced in 1930. (It turned out that the Nazis tended to leave alone couples with one Jewish partner and a Christian partner, but no one could be sure.)

Four years after divorcing her first husband, Silvia's mother married William Steinberg, a talented conductor. Together with Silvia, now eight years old, in 1936 the couple fled Hitler's German tyranny. Steinberg went to Tel Aviv, where he helped create the Palestine Symphony Orchestra. In 1938 he was recruited by Arturo Toscanini to assist him in running the NBC Symphony Orchestra.

Silvia loved America. She graduated from New Rochelle High School in 1946 and attended Barnard, earning a BA with honors in Art History in 1950. As a new immigrant, she took to baseball as a way of embracing her new  homeland and followed the Brooklyn Dodgers until, through Walter O'Malley's teachery, they decamped for Los Angeles in 1957. (Ask a Brooklyn Dodger fan: "If you had a gun with only two bullets in it and were in a room with Hitler, Stalin and O'Malley, which one would you shoot?" The answer will be: "Shoot O'Malley, twice!")

She switched her allegiance to the New York Mets and never for a minute ever left them.

Studying for an MA in art at Columbia University graduate school, she met and, in 1951, married Lloyd Tennenbaum, who was a student in mathematics and philosophy and became a rabbi.

Meanwhile, Silvia's father, by then conductor of the Pittsburgh Symphony Orchestra, became also a guest conductor of the New York Philharmonic and in the 1960s the family stayed in East Hampton during the summers.

The Tennenbaums moved for seven years to Lynchburg, Virginia, where Silvia gave birth to three sons. Her husband was eventually appointed rabbi to two congregations on Long Island's North Shore and the family settled in Huntington, New York.

There Silvia wrote her first book, Rachel the Rabbi's Wife (1978), a caustic roman à clef about the life of a self-important rabbi and a demanding congregation that believed in its entitlement to unlimited support services from the rabbi’s wife. The book was a huge success. Silvia told me she sold the paperback rights for a million dollars, and used the money in part to build on the property a studio where she liked to write.

However, by 1981, when we became her neighbors, the couple had separated. Silvia retained the house. She was extremely welcoming and told us all about the merits of registering as Democrats in East Hampton. 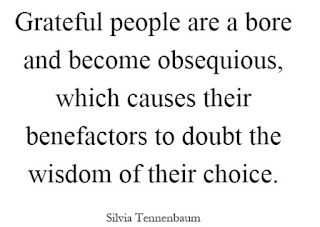 During the next 33 years, Silvia continued to be outspoken and flamboyant. She had her front fence painted a bluish-tinged purple, not quite the same color as the streak in her hair.

In the 1980s, one of her letters to the East Hampton Star prompted a local resident to place in front of her house a sign, “Communist Headquarters”. A critic of Israeli policy toward Palestinians, she preferred not to be formally associated with the large Jewish Center of the Hamptons and instead affiliated with Sag Harbor’s Temple Adas Israel, the oldest synagogue on Long Island, led until 2014 by widely published Rabbi Leon A. Morris.

Silvia and her husband were divorced in 1986 (he was a few years older than Silvia and predeceased her by a decade). She had returned to Columbia, where she earned an MA in art history in 1983. Besides frequent letters to the East Hampton Star, she wrote for the New American Review and the Massachusetts Review. One story, “A Lingering Death,” was selected by Joyce Carol Oates for “Best American Short Stories of 1979.”  Her second novel, Yesterday’s Streets (1981), was a fictionalized account of her family’s life among upper-middle class Jews in Frankfurt, Germany from 1900 to 1936. In 2012, Frankfurt named this book its "Book of the Year”.
She is survived by her three sons — Jeremy, David and Raphael (Rafe). She was buried at Green River Cemetery in Springs on June 29, 2016. Rabbi Daniel N. Geffen of Temple Adas Israel presided then and presided again over the unveiling, followed by a sharing of food, beer and memories at Ashawagh Hall.

Silvia was generous. She gave us a few things she didn't need when we first became her neighbor. She was always responsive to our suggestions about improving our properties and planted pine trees between us after just one suggestion. We and others missed her greatly when she moved to the Philadelphia area.

Alice notes how much fun Silvia was to talk with. She always had an interesting individual point of view, and effectively marshaled facts, often little-known ones, to support her view. We enjoyed her hospitality when we first arrived and were beneficiaries of fertilizer generated from horses in her back yard. She also often shared lilacs from her prolific bushes.

See also: Announcement of her death, one year ago.
Posted by John Tepper Marlin at 11:05 AM No comments: