The Club still has the piano that President Truman was playing when Lauren Bacall was sitting atop it, on February 10, 1945.

On a visit to the National Press Club in Washington to entertain members of the armed services, Bacall sat on the top of a piano while Vice President Harry S. Truman played some music.


The photo series got even more attention when Truman became president later that year, after the death of FDR.

The idea for the photos came from Bacall’s press agent, Charlie Enfield, who was also the publicity chief at her movie studio, Warner Bros. He prompted her to pose with Truman.

I reenacted the scene with my college contemporary, Larry Feinberg. Instead of sitting on the piano, we let the Bacall-Truman photo do that work and Larry was the photographer. Feinberg was on the staff of the Harvard Crimson and went on to work for the Washington Post for many years before leading research for the National Assessment of Educational Progress.

It was Harry Truman who famously recommended to Washington newcomers: "If you want a friend in Washington, get a dog." Alice and I have a dog, a hero dog, Hachikō (see https://nyctimetraveler.blogspot.com/2016/05/hero-dog-is-hachiko-part-wookiee.html).
Posted by John Tepper Marlin at 8:32 PM No comments:

WALES | Nannau and the Nanney Family 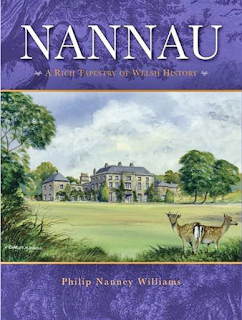 February 3, 2019–Philip Nanney Williams has written a truly impressive book about the house of Nannau in Wales, the family home of the Nanneys and Vaughans.

The family tree that he includes with his book is an extraordinary one, going back to the Imperator (Emperor) of North Wales, Cunedda Wiedig (380-450), who married Gnal verch Coel, who married Old King Cole, the merry old soul.

They and the King of Deheubarth use lion rampant, typically Gules on Or. The lion rampant is also shown as Azure on Or and Or on Gules. All of these versions are prominent in Welsh heraldry.

Other devices used on later arms are

Nannau. The title of the book refers to a mansion and estate in the parish of Llanfachreth, Meirionnydd. It is named for the family who lived there.
The Nannau family is descended from the princes of Powys through the 13th century prince Ynyr Hen.

The family has a tradition of being patrons of prominent contemporary poets. The mansion is mentioned in several poems from the 14th century on.

The poet Llywelyn Goch ap Meurig Hen was a part of the family.  Siôn Dafydd Las (died 1694), of the Nannau bard family, is considered to be one of the last of the traditional Welsh family poets.
Posted by John Tepper Marlin at 4:45 PM No comments: